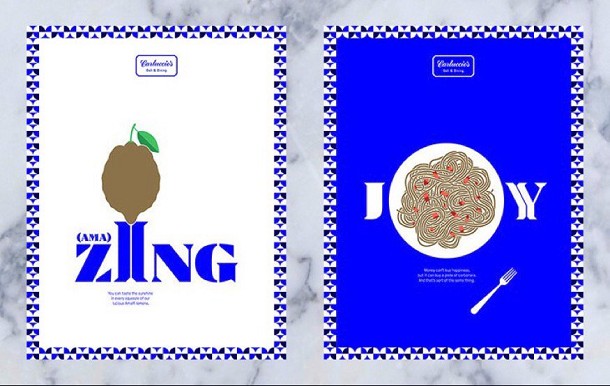 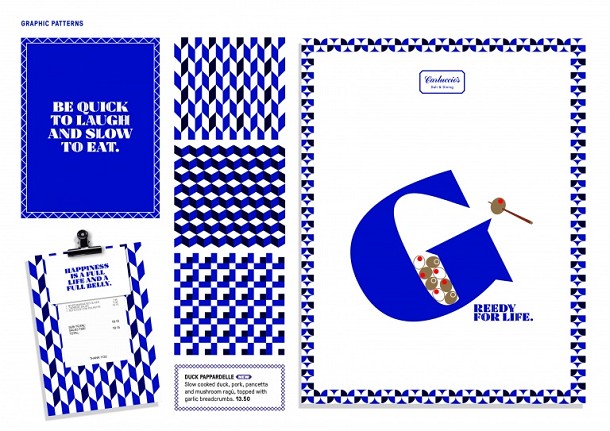 
Carluccio’s has undergone a major rebrand in order to welcome a new audience to the Italian restaurant chain.

In order to appeal to its desired demographic consisting of young diners, the restaurant has refreshed its logo and graphics, which now include geometric patterns and brighter colours.

Creative consultancy Frontroom are behind the redesign of the graphics and branding, while interior designers Fusion by Design are in charge of rolling out the new store interiors.

The new logo will bear the brand’s new name – Carluccio’s Deli & Dining – and now has a brighter, navy blue and octagonal border with bevelled edges around the wordmark.

The new logo can be seen either at Carluccio’s or Caluccio’s Deli & Dining; its presence depends on whether the store is an old-style branch or a newly revamped site with an open-plan kitchen with more focus on the deli.

A number of posters have been designed, and Creative Director of Frontroom Jackie Davis, says they are inspired by the “clean blocks of flat colour and the 1930s sophistication” of “classic Italian posters.”

Of the graphic look and logo, she said that previously it was a “little bit old fashioned,” and the consultancy aimed for a “more energetic and surprising” look.

She added: “We wanted to get back to simplicity. It’s not about serving food on wooden boards, or about being bashed over the head with hanging hams – it’s just about good food, good friends, and good times, without sounding too cheesy.”

You can catch the new look online, through in-store branding, restaurant interiors, on menus and other print materials. Every new-style open-plan restaurants will take the Carluccio’s Deli and Dining name, while the traditional-style restaurants will stay as Carluccio’s.