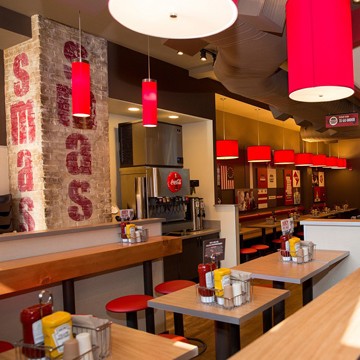 
It’s safe to say that Smashburger are one of the fastest growing restaurant concepts in the US, and to top that off that they have announced the launch of five new UK restaurants. Heads up to all your foodies in – Bath, Dunfermline, Wednesbury and Inverness. These branches are following the launch of the successful brands in Milton Keynes, Brighton and Newcastle.

The first will open on Southgate street in the picturesque city of Bath, in early May. They are hitting up the Scottish city of Glasgow in June, followed by a fellow Scottish branch in Dunfermline in July and Inverness in November. The final restaurant at Junction 9 Retail Park in Wenesbury is due to open it’s doors in August 2017.

The word on the street suggests that Smashburger plan to open 1o UK restaurants over the next 12 months, with a further goal of 35 restaurants by the end of 2020. Cities include London, Manchester, Cardiff, Leeds, Edinburgh, Reading and Colchester.

We can’t wait to get our teeth into these burgers!