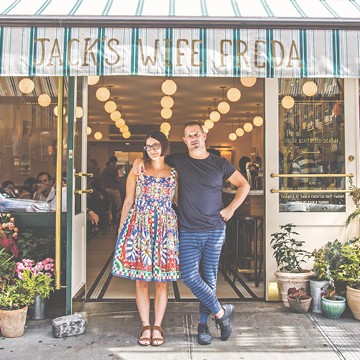 How to make a small restaurant go viral


The key to this success story is signature items and an efficient use of social media. It’s rare that an Instagram post about a sugar packet could go viral, but Jack’s Wife Freda have got this down to a T.

Their coffee cups are just one of the items that add that little bit of excitement into the branding of the restaurant, printing sayings like “I LOVE YOU A LATTE,” “HUG MORE,” “SUGAR PIE HONEY,” and “HEY THERE, HOT-TEA.” It’s a small but critical design choice that’s become a status symbol of dining there and makes the place easily identifiable and desirable.

Laura Moyal, the founder of Paperwhite studios, is the genius behind this concept, and it appears to be working a treat! The restaurant has a mere 120,000 followers on Instagram, proving the she has the skills to turn small, local restaurants into lifestyle brands, defined as much by their visual identity as their food. Moyal also works in combination with well-known restaurant CHLOE, which the same tactics appear to be working up a storm.

The online success all started when Jack’s Wife Freda Owners Dean and Maya Jankelowitz hired Moyal, a friend, before they opened in 2012, asking her to design the menu. She landed on a oversize paper menu dotted with quirky illustrations. “It took a moment to get it right,” Dean says. “Literally a moment. I think the first menu she came back to test with was perfect.” And, since the menu could serve as a place mat, it also created an ideal backdrop for overhead food shots — just as Instagram’s popularity was starting to grow.

Its initial social-media success was actually more the result of a happy accident than a precise design or marketing strategy. “Jack’s was not designed for Instagram,” Moyal says. “It just happens that Instagram was picking up around the same time, and Maya was posting shots of the restaurant, and it allowed our work to be more public.”

In custom-created handwriting, Moyal printed sayings on the aforementioned sugar packets, as well as on coasters and matches (“We’re a Perfect Match”). “We wanted guests to really feel the presence of Jack and Freda, and having a typeface derived from actual handwriting was an important contribution to that feeling of authenticity,” she says. “We chose the secondary font — Horley, a nostalgic old-style serif — as a reference to classic ‘café’ aesthetic.”

A crucial part of the success of this branding is that it’s flexible: Moyal prefers to establish an ongoing partnership with a restaurant, so she and her team can see what works and adjust accordingly. “There’s no secret to making a restaurant go viral, and before the doors open, you don’t know how people will react,” she says. “But part of creating a successful brand in this context is constant contact with our clients,” she says. “Once we launch a brand, we don’t just walk away. The brand is a living, breathing thing that we maintain on a regular basis. We’re not letting it go stale.”

The biggest challenge at by CHLOE was making vegan food, often seen as holistic and serious, come across as fun and playful. To that end, Moyal once again created charming illustrations: icons of pineapples and French fries and cameras that appear on paper place mats, takeout bags, cups, burger holders — practically every surface in sight — creating countless different Instagram “moments,” and for the time of a meal, making customers feel absorbed into the world of the restaurant. There’s even a logo printed on the side of a whole coconut. “We wanted to push against the expected notions of what a vegan restaurant would look like,” Moyal says.

Most of the script and icons are in black-and-white, but there are a few pops of bright colors. “Early on, I said, ‘If this brand is going to be around for 100 years, I’m going to get so sick of a color!” Wasser says. “That’s why a lot of it is black-and-white, because it’s so classic. My friend said it looked like a clothing company, and I said, ‘Perfect!’ We want it to feel more like a lifestyle brand.” While by CHLOE is clearly targeting millennials — “That’s the most current group that’s into food trends,” Moyal says — the brand also plays well to kids. There are crayons in the restaurant so that people can color the menus themselves, and then, of course, Instagram their art. (By CHLOE has 68,000 followers, but is so confident in customers snapping photos that it doesn’t post any actual images from the restaurant, just lifestyle inspiration.)