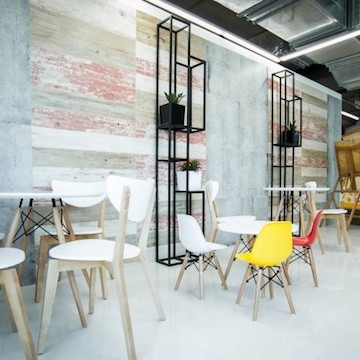 The art of design by London's best restaurants


Restaurant design has changed dramatically in the last 15 years, and it doesn't show any signs of slowing down. It may be argued that the since Noma stormed onto the food scene in 2003, the rulebook for high-end restaurants changed completely. Out with those plush carpets, dazzling chandeliers and most importantly- out with the those outdated table cloths.

Noma introduced a new light to the industry, featuring natural wood aesthetics with minimalist design aspects. You'd be hard pushed to find a similar class restaurant that hasn't followed in these footsteps.

Having said that, it doesn't mean it is going to stay like this forever. As Simon Rawlings, Creative Director at David Collins studio, suggests "I think that tablecloths will come back in full force". He might be right, but these days it's all about standing out from the crowd and creating an interior design that aligns with the ethos of the restaurant.

“There’s something wonderful about a tablecloth. It doesn’t just mean formal – it’s great for acoustics, great for operations, makes the food look great, reflects the light. It has so many plus points. It’s always one of the first conversations I have with a chef: ‘Do we have tablecloths?’ And I always say ‘yes’. I support tablecloths.”

There are over 400 UK entries in this year’s Restaurant & Bar Design Awards out of a nearly 1,000 worldwide. They range from the dramatic (the swooping lines of Eneko at One Aldwych, with its gleaming copper staircase and cherry-red banquettes) to the minimalist (Covent Garden’s Frenchie, with its tasteful white surfaces) – but what separates them from the hundreds of also-rans that open every year?

“For me, it’s about the usefulness of the design more than the aesthetics,” says James Lowe, head chef at Lyle’s and one of the judges for the awards. “Restaurants are really complicated, busy places, with lots of moving parts. To make them work, you need to have efficiently designed spaces.

"There’s more to it than ‘does it look pretty’ or ‘isn’t that a beautiful piece of art’. There are restaurants in Dubai where everything is painted gold and nothing could appeal to me less. Good design should make your life easier. It should be utilitarian and built to last.”

Lowe says the quality of restaurant design has shot up over the last few years, thanks to young chefs being encouraged to work abroad rather than rise through the ranks in the punishing environment of a hotel kitchen. This allows design ideas – as well as food – to quickly spread across the world.

“In Lyle’s I designed a lot of the woodwork based on things I’ve seen working in France Denmark, Australia and America. You get different attitudes to design in all of those countries. Kitchen design in the UK has traditionally been a secondary concern, something to be done on the cheap after you’ve made the dining room. But, thankfully, that’s changing.”

Jason Atherton, owner of a veritable empire of London restaurants, is almost as well known for his stylish dining rooms as he is his cuisine; Berners Tavern, designed by Ian Schrager, is palatially opulent, its triple-height walls filled with gilt-framed paintings and ornate cornicing. “It still takes my breath away,” he says. “But it would all be for nothing if people didn’t feel comfortable there.”

To make this happen, Atherton and his staff put every stage of the design process through rigorous testing. “We have our banquettes and chairs made months in advance – we sit on them, and if we don’t like the way they feel, we send them back. There’s a restaurant I love, which I won’t name, whose banquettes are so uncomfortable I refuse to sit on them.

“A lot of designers don’t give a shit about practicality, as long as things looks beautiful, and restaurateurs have to deal with the aftermath of making it work. But our executive team – head barman, sommelier, service director – will look at every stage of the design, right down to where the cutlery’s stored. If someone drops a napkin, they need to be right there: the waiter can’t be going all the way to the back of the kitchen to get a new one.”

Architect Rawlings agrees – he says the first thing a designer should do is conceptualise the way a restaurant will work. “You need to understand the operation: the type of food, the speed of service, the level of comfort. When you walk into The Wolseley, which is a big, bustling room, you still get a sense of calm, a feeling that you have your own space within the room.

That’s because the flow lines and service channels and operational layout have all been carefully engineered. Then there are the acoustics and lighting, which play a huge role in how a room feels. People have a great time at a restaurant because it felt good, not because they loved the colour of the chairs or the wallpaper or the stain on the timber.”

Only when you’ve got all of these things right, Rawlings says, can you start worrying about the aesthetics of the room. And even then there are pitfalls. Over the last decade we’ve seen thousands of restaurants across the world opening with essentially the same aesthetic, a combination of Manhattan warehouse and Noma’s woody minimalism. Few, if any, of these places will go down in the annals of restaurant design.

“We try to ignore trends and make something that speaks in its own right,” says Rawlings. “Over the last few years, it got to the point where every restaurant looked the same whether you were in Hong Kong, New York or London – everything had the same vocabulary: exposed brick walls, dim bulbs. That’s something we never fell into.” Lowe sums up the slow death of this “bricks and bulbs” look: “When a basic chain starts using your aesthetic, you know know it’s over.”

S­­o, you have a space that works, furniture that’s comfortable and an aesthetic that avoids cliche; job done? Not quite. Designing a great restaurant is all about the details. I remember speaking to Atherton a few years ago just as he was opening City Social, and he was having a mini crisis about the napkin holders.

“Nothing should be ignored,” he tells me today. “The details are paramount. When I was doing a lot of TV a couple of years ago, I wasn’t able to get involved in such fine detail in some of the restaurants, so I thought ‘this isn’t what I want to be, I don’t want to be famous, I want to be a great restaurateur’. When I opened up Sosharu I found this amazing pottery place in Korea which did these beautiful north Asian clay pots – authentic touches like this make a big difference.

"When I worked for Gordon Ramsay we had these huge silver serving trays that were really heavy and I remember these poor commis waiters carrying them full of plates and I thought, ‘You poor bastards, you must be knackered’, so I designed a lightweight tray that still looked beautiful but will help them do their job a bit easier.”

And one last thing: “There’s an element of personal taste”, says Atherton. “At the end of the day, if you’re paying the bills, you’re allowed a bit of self-indulgence.”

When all of these disparate parts are working in harmony – the lighting and the acoustics and the service channels and the furniture and napkin holders and the table loths and the million other considerations – most customers won’t­­­ even notice them; they’ll just walk out of the restaurant thinking ‘what a brilliant night’.