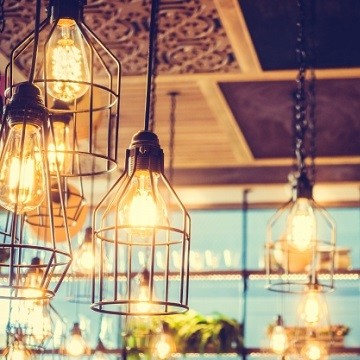 Top Seven Restaurant Designs From Around the World


A restaurant’s design, in some cases, can be just as important as the food it serves. Many designers go the extra mile to create stunning restaurants that stand out in a competitive market. Below are seven of the some of the most impeccably designed restaurants across the globe.

The first is The Jane, located in the Belgian city of Antwerp. This Michelin Star restaurant can be found in a building which was once a chapel of a military hospital, whereas now, the architecturally impressive building has been turned into a sophisticated gourmet restaurant designed by Piet Boon, a respected Dutch design studio.

Preserving the ceiling was a priority to the designers, however the windows have more of a contemporary feel to them; their window panels feature a vast range of images such as skulls, trophies, apples cores and even ice cream. A feature that any diner simply can’t miss is the awe-inspiring 12x9m chandelier weighing in at 800 kg!

Using lighting, sound and visual elements like trees and vines, the San Diego based restaurant and nightclub Parq creates an outdoor like space indoors.  Designers from Davis Ink came up with this idea, their concept was to design a space which was both dramatic, yet inviting and organic at the same time.

The designers managed to create an enchanting atmosphere and a visually stimulating space, which was achieved by integrating greenery and exposed bricks with more formal elements such as chandeliers and old-fashioned mirrors. Some guests have even said it feels like they are in an adult playground.

The third restaurant that needs to be noted is the Bennelong, which can be found in the world-renowned Sydney Opera House. This restaurant is the epitome of pure luxury. This incredibly well constructed restaurant was designed by Jørn Utzon.

The colour remains harmonious with the Sydney Opera House’s neutral tones, with warming hints of brass, timber and copper notes running throughout the whole establishment. Eye-catching Aboriginal artwork is now a permanent feature along with Tom Dixon’s iconic “Melt” lamps.

Fourth on the list is the Nopa, a high-end restaurant and bar located in Istanbul. Keeping it local, the space was designed by Istanbul-based design studio Autobahn and combines stunning contemporary architecture and nature through the usage of natural elements and geometric patterns.

Marble, one-of-a-kind lighting, rich natural wood and beautiful furniture work together to create a quaint and relaxing space. However the outdoor dining area is the feature which makes the restaurant so memorable. The outdoor area has a vertical garden and miniature waterfall, creating an atmosphere which is beautifully serene and the perfect escape from a fast-paced city.

The iconic undersea restaurant is fifth on the list. The Ithaa - meaning pearl - on Rangali Island in the Maldives really takes the phrase “dinner with a view” to a whole new level.

It’s the only restaurant in the world that is an all-glass underwater dining establishment. Located five metres below sea-level, diners get to experience mind-blowing underwater views, with tropical fish and marine life being a key sighting.

The opulent White Rabbit restaurant, which can be found on the 16th floor of the notorious Smolenskiy Passage in Moscow offers an incredible 180 degree view of the city. The glass-dome shaped ceiling is impressive on it’s own, but paired with the chic and colourful sofas and hardwood floors makes the restaurant an unforgettable dining space.

Finally, The Snow Castle Restaurant in Finland is known around the world for being made out of snow and ice! This fairytale like restaurant is an integral part of the Snow Hotel, which holds a world record for having the longest walls made completely out of snow.

It’s not just the snow walls that make this restaurant so spectacular; there are also incredible ice sculptures and tables which look even more magical due to the ornate atmospheric lighting. The restaurant can only be open for business from late January until early April due to the outside temperature increasing; and the restaurant has to be rebuilt every year!