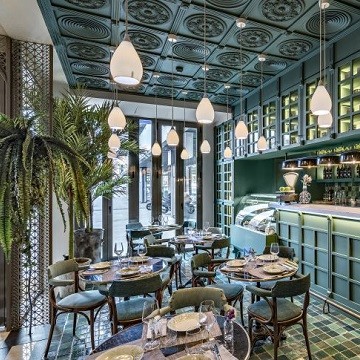 Eight beautiful restaurants From Around the World


A restaurant’s decor and styling is just as important as the quality of the food itself. Every detail of the design - the colour scheme, furniture, lighting and flatware - sets the tone for the meal. The ambience should complement the ideation the restaurateur is trying to convey.

There is a new genre of restaurant taking centre stage. Restaurant interior designers are taking a more inventive, thematic approach which can be transportive and create a space that facilitates a truly immersive dining experience.

German publisher Gestalten have created a new book named “Appetizer”, which features a smorgasbord of restaurants from across the globe that have adopted this new thematic approach to interior design.

“Some of these restaurants look good enough to eat,” said the editors of “Appetizer”. “This shift in interior design says a lot about who we are today: constantly evolving and diversifying our definition of good taste, and, most importantly we now desire to be submerged in colour, light, nature and human interaction.”

Here are a few examples of some breathtaking restaurant designs from around the world:

The Foxglove is a must-see for any James Bond enthusiast. To gain entry, guests have to go through a secret door at the back of an umbrella shop - which can only be opened by touching a specific umbrella handle! When you finally get inside, you will be greeted with an arched space which resembles a vintage car, aeroplane or the dining car of a traditional train. The deep, rich colour palette of reds, browns and golds give this space a strong masculine feel.

The port-side location of the OneOcean Club most certainly influenced local firm El Equipo Creativo's design. The mirrored ceilings mimic the sea, transporting their guests into an underwater setting. The hanging brass lights and gold plated supports for plants resemble the masts of the docked yachts.

The Refuge by Volta by Michaelis Boyd (Manchester, UK)

Now known as Manchester’s Principal Hotel, this 10,000-square-foot food and beverage space was transformed by British designers Alex Michaelis and Tim Boyd, the interior architects behind London's Groucho Club. The design duo wanted to enhance the Victorian Gothic building’s traditional features like the striking tiling and timber paneling. Midcentury-inspired furniture and other decorative finishing touches were added to the design to keep the space from feeling cold, sterile and unwelcoming.

Don’t judge this restaurant by its exterior! Inside is a restaurant that looks like an illustration from a children’s book. Firm Taller KEN, created a space dominated by candy-colours, vibrant patterns, tropical plants and even vintage cars creating an urban oasis away from the monotonous outside world.

Jorge Lozano was on a mission to create a nostalgic continuation of Cuba at Madrid’s Habenera. The green colour scheme and the use of wood reflects Loranzo’s appreciation of the island’s natural beauty. Aspects of colonial architecture can be seen in the elaborate ceiling moldings and tiled floors.

This trendy coffee shop and restaurant chain decided to go against the grain, by designing a space that you wouldn’t associate with these sorts of establishments. The contrasting colour scheme, velvet, marble, brass and soft lighting designed by Melbourne firm Biasol, gives the space a sophisticated feel.

Despite being inspired by the nearby historic churches and the cosmos, David/Nicholas’ design for Keleo is extremely fun, childlike and playful. The Kandinsky-esque carpet hanging from the back wall - a collaboration between the Beiruti studio and the Dutch Moooi Carpets - perfectly mirrors the colors, concepts and textures featured within the space.

Founded in 2013 by Barbara Miolini, a Swiss-Italian who moved to India in 2005, the Bar Palladio is the epitome of luxury. She asked Dutch interior designer (and former fashion designer) Marie-Anne Oudejans to create the space that evoked the pure, unadulterated glamour you feel when at Venice's Caffè Florian and Harry's Bar, whilst still incorporating traditional Mughal motifs.